History Founded on May 26, 1948 to "protect the inhabitants of Israel and to combat all forms of terrorism which threaten daily life", the Israel Defense Forces (IDF or Tzahal has a long and varied history. Born out of the Haganah and Palmach branches, the modern version of the IDF as we know it today came into existence during the 1949-1956 period with the Arab-Israeli wars being waged. Mandatory Service As army service is mandatory for all able-bodies citizens of Israel, unless exempted for religious, physical or psychological reasons. Men are required to serve 3 years while women are only required to serve 2 years. Of course, as with other armies, soldiers can choose to complete an officer's course and continue on with their service well beyond the mandatory time period. However, ranks are given based on time of service and not by merit or accomplishments. Citizens not able or to serve with the army are given an option of National Service for 2 years which involves volunteer work all over the country. Finally, a reserve period is required of all soldiers for up to one month a year following discharge from their units. Israeli Army arms The three main bodies of the IDF are the Ground, which include infantry/paratrooper and artillery units, Air Force (see Israeli Air Force t-shirts) and Sea Corps (see Israeli Navy t-shirt). Of these, the elite units such as Golani (see Golani t-shirt), Paratroopers (see Paratroopers t-shirt) or the Mossad (see Mossad t-shirts) have garnered national attention and interest. Israeli Army T-shirts Because of this fascination with these units, many Israeli Army T-shirts, or Tzahal T-shirts are sold on a daily basis all over the world. You may also find sweatshirts or IDF T-shirts with other insignias, such as the Police, Ambulance or Fire Departments. Israel Army T-shirts are an important way to show support for the state of Israel, no matter what country you are located in and will make a perfect gifts for any age or gender. Spanning from generation to generation, the IDF have had generations of family serve in the same units or branches as them. This sense of national and personal pride is what makes Israeli Army T-shirts so popular. Show your support today! 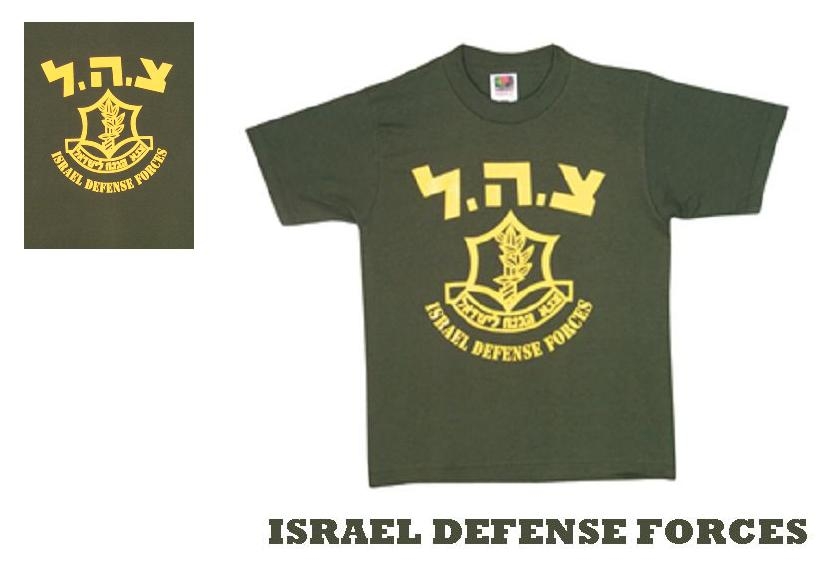